The hardest part of fermenting food is the wait to enjoy eating it!

We guarantee the QRP FOOD FERMENTATION KIT to be reliable for producing perfect cultured food without mold! Simply follow these . . .​

1. The 3-Piece Airlocks are shipped assembled. Wait and wash them when instructed so that you’ll remember how they’re assembled. Wash everything else now with mild dish detergent and warm water. Please DON’T use boiling water or harsh chemicals with ANY of our food-grade products. If washing in the dishwasher, place parts caged inside a utensil pocket or on the top rack enclosed inside a mesh bag. To remove persistent food odors between fermentations, set parts outside in direct sunlight.

2. Prepare your food. Study your specific food fermentation interests for recipes and preferable fermentation times beforehand by using Google on the internet to become familiar with the options and process. You will find lots of advice, so you’ll need to come up with what best suits your tastes after several trials. We recommend using some red cabbage for it’s Vitamin C benefits.

3. Fill a Mason jar with the prepared food and your choice of brine (we use kefir whey) lightly tamping the food down into the jar until it’s only slightly compacted. We prefer to fill the jar only to the jar’s elbow with food to leave room for food expansion during fermentation. Then the brine should be added until it covers the food at least ¾ – 1 inch. Larger pieces of cabbage leaves are most helpful to keep smaller food particles submerged underneath the brine.

4. Place the QRP Fermenting Cup, with teeth pointing down, inside the jar where it situates on the mouth of the jar and barely sits in a pool of the brine. If the Cup has warped during storage, don’t fret; it will resume its shape and be functional as designed when placed on the mouth of the jar. If you’ve filled the jar only to the jar’s elbow with food, the food mixture (if chopped or shredded) may touch the Cup, but shouldn’t be pressed against the bottom of the Cup during assembly causing the Cup not to sit on the mouth of the jar, and the food should be no more than ¼ – ½ inch below the Cup. During fermentation, as the food expands and rises, the Fermenting Cup will hold the cabbage leaves and food down and submerged under the brine while isolating the tube of the Airlock, thus protecting the Airlock from contamination, which could inevitably cause mold.

5. Push the round silicone Seal up into the roof of the jar Lid with both thumbs to where it’s completely seated underneath the Lid’s threads.

6. The Fermenting Lid is now ready to be screwed on top of the filled jar. Be gentle and patient until you sense the Lid is somewhat snug creating an airtight closure. Overtightening could damage the Seal and make it difficult to remove the Lid.

7. You’re ready to disassemble and wash the Airlock(s). First it should be helpful to get an understanding of the assembly and function of an Airlock: The 3-piece Airlock consists of the Cavity or Cylinder, the floating Piston, and the vented Cap. As the fermenting probiotics exhale oxygen, it’s released from the jar by entering the Airlock Cavity’s bottom tube, forcing the Piston to rise up against the roof of the vented Cap, and the air is finally released through the small air holes in the Cap. Be sure to fill the Cavity halfway with water before reassembling the Airlock by placing the Piston back in the Cavity and snapping the Cap back onto the top of the Airlock’s Cavity.

8. Gently twist while inserting the shaft of the Airlock into the Grommet installed in the jar lid only deep enough that it appears through the bottom of the Lid while insuring a tight seal of the Grommet.

9. Finally, we’ve left enough space on the top of the Lid for labeling with dates, etc.

· For an optimal variety of healthy probiotics, store for 5 weeks at 65°F. Within 24 to 48 hours, you’ll start seeing air bubbles escaping from the 3-Piece Airlock. As the fermenting food expands, the brine will rise up and may enter through the air slits in the top of the Fermenting Cup. Then it will be released back into the jar through the hole in the bottom of the Cup and should keep the food covered with brine. If the brine decreases to a level where food is exposed to air, open the Fermenting Lid and pour a little purified water into the Cup to re-enter the fermentation and replace the Lid to seal the jar closed. And if you’ve overfilled your jar, and brine does make its way up into the Airlock, temporarily replace the dirty Airlock with the Stopper while washing the Airlock as soon as possible to prevent mold. If you’ve followed these instructions, this is a mold-proof system.

· Use the Stoppers while storing your fermented food in the fridge once the fermentation process has ended.

​We ferment for 5 weeks to get the maximum probiotics. We use Kefir Whey rather than salt because salt will kill some of the best probiotic strains.

The following factors will change the taste:

1) the food being used including types of herbs, spices, etc. We like using carrots, cauliflower, cucumber slices, turnips, parsnips, green beans, steamed edamame beans, and small amounts of celery, onions, garlic cloves and bread and butter pickle seasoning for flavoring.
2) the water used for the brine (we use filtered Kangen water free of chemicals rather than tap water)
3) the amount of salt if you’re using salt (We use Kefir Whey rather than salt because salt will kill some of the best probiotic strains.)
4) the length of time you’re allowing the food to ferment (the shorter the time, the sweeter . . . the longer, the more sour)

No type of metal is ever recommended because the metals will leaches into the food, regardless of the quality of the metal. (As a cancer survivor, I’m very particular about this.)

If you’ve only tried one batch thus far, try again, and see if something changes. We’re always experimenting with the Kimchi we’re fermenting to enhance the flavor. You also might want to Google homemade sauerkraut to see if you find anything there. 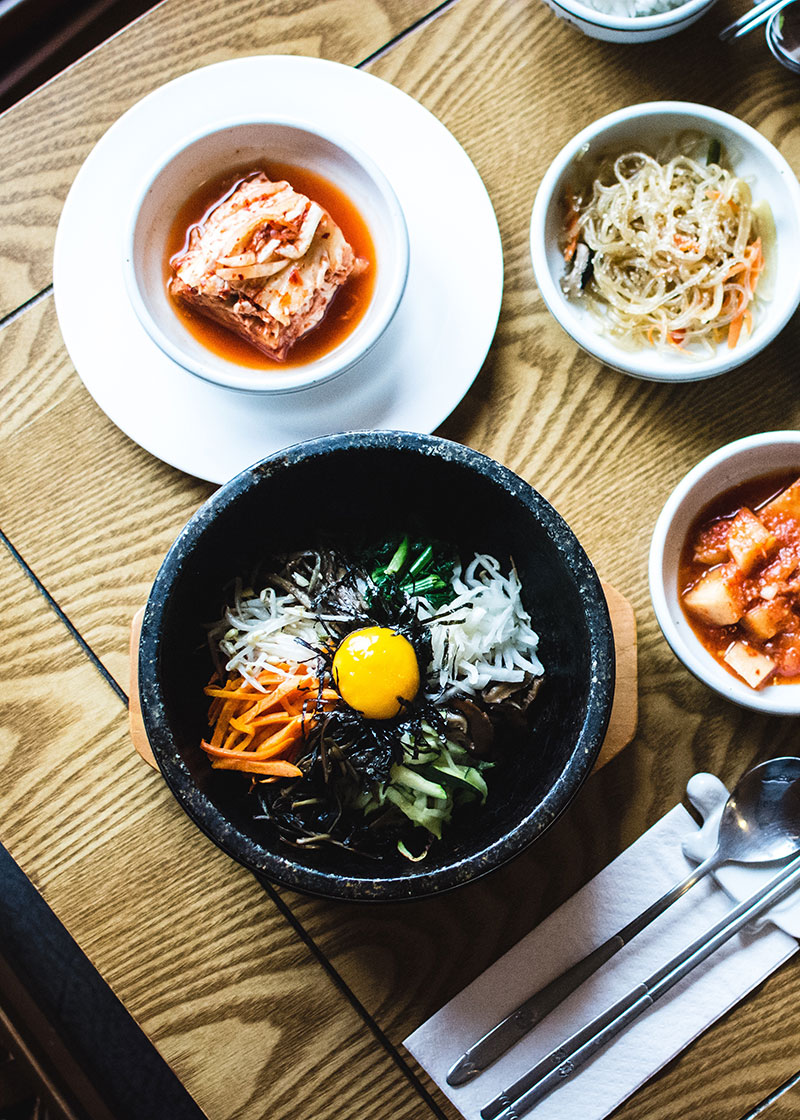 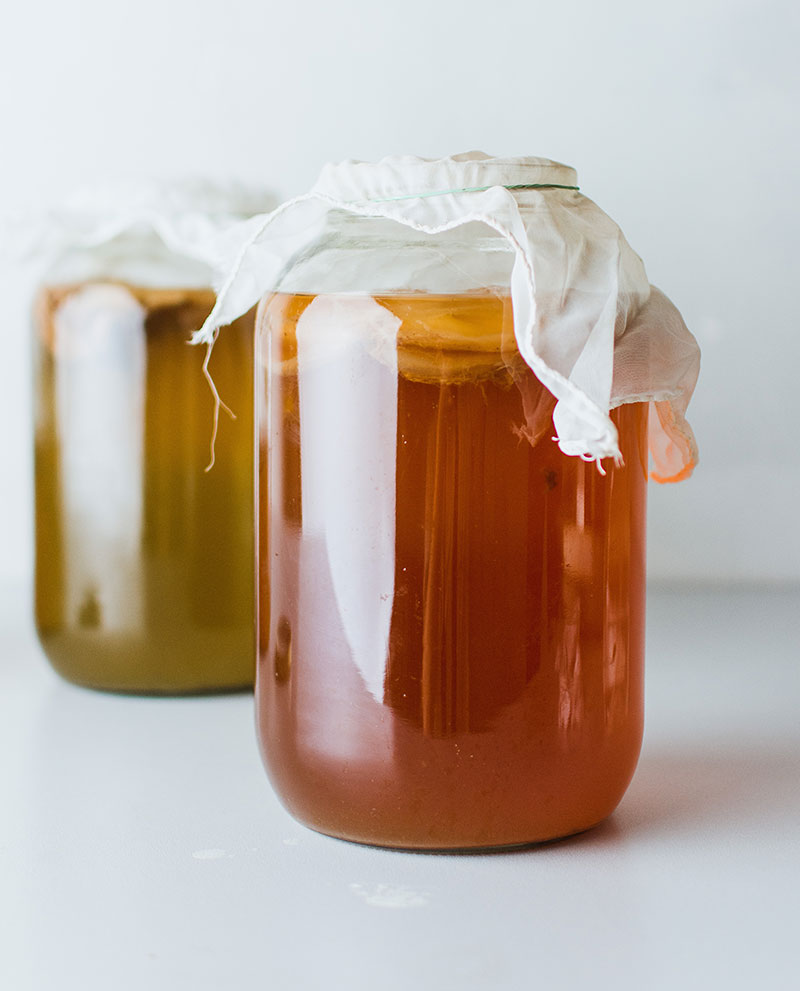 We ferment for 21 days during the initial fermentation of Kombucha in preferably a gallon jar. We use either cheesecloth or a wash cloth to enclose the mouth of the jar with a big rubber band to keep gnats out while allowing the SCOBY to breath. After 21 days, we use our QRP Fermentation Kit for a 3-day 2nd fermentation. We’ve removed the SCOBY and filled quart jars with the fermented Kombucha poured over a few pieces of selected dried fruits. You don’t need our QRP Food Retainer Aeration Cups for fermentation with liquids. After the 3 days, we simply remove the airlock, and place the stopper into the grommet for storage in the refrigerator until we’re ready to drink the Kombucha. Then we strain the liquid through a cloth bag into another jar, allow the particles to settle at the bottom, and pour off the clear upper part of the liquid for drinking. We prefer to have as little yeast and sugar in our Kombucha as possible to prevent Candida and so as not to feed Cancer or affect our blood sugar.